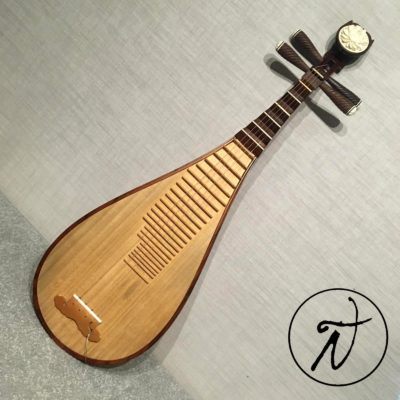 The Pipa is a 4 string lute, that is synonymous with traditional Chinese music. It is the most widely recognised lute in China and its origins can be traced back to over 2000 years ago.

The strings would have originally been made from silk and played with only the fingers. However, modern steel strings are now most popular, which allows for metal finger picks to be used. As these enhance the volume and attack of the instrument (and probably the lifetime of the strings no doubt, when compared to silk!! 😉 )

It is said that the Pipa was designed and created for the Han Chinese princess Liu Xijun, when she was betrothed and sent off to marry the barbarian king of the semi nomadic Wusun people. The main design feature of the Pipa, being so that the princess could play music on horseback, whilst travelling out to meet her betrothed.

To this day, the playing position of the Pipa is still upright.

Although the story of the princes is most widely accepted, many texts actually predate the Pipa’s origins and some can even be traced back to labourers working on the construction of the Great Wall of China (771–476 BC). The workers would apparently stretch strings over drums, to create what is called a Quin Pipa.

Although at this time in China, nearly all Chordophones were referred to as a Pipa. Including those which would later be transformed and evolve into the Ruan (still round in shape) and the Quin, which is like a long zither.

It was only until the Song Dynasty (960 – 1279 AD) that this pear shaped, plucked lute was referred to solely as the Pipa.

Whatever its origin, you will know a Pipa when you hear one. It has a very distinctive and beautifully haunting sound, and the instrument is just so enchanting to look at too. Earlier and more elaborate models would have actually been embellished with Jade as decoration and horn for the tuning pegs, with small pieces of jade or bone for the frets.

I’m so pleased to finally have a Pipa pass through the workshop, and now with a new nut and repair to the head stock, this lovely piece is ready to hit the road again and pass on more stories.

If you need any musical instruments repaired, please do let us know here https://www.truenotes.uk/contact-us/

Latest from our blog

Join us on social media
Scroll back to top